New Release and the "If it weren't for bad luck..." Sale! 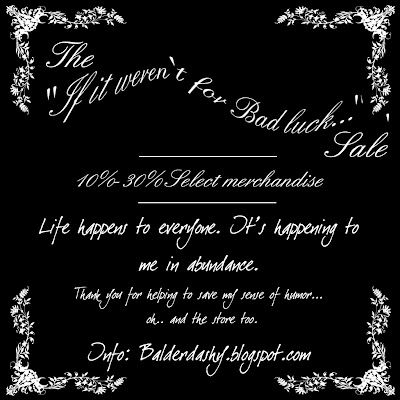 I am not a person who really likes airing my drama for the universe to see... however, being that I dont want to close the store, have it disapear, be forced offline, or... suffer through several other things that are about to happen... I'm going to shove my pride in the basement for a minute... or a week... or.. something.

I am a chain of events. Last year, my computer died. Big time. The power supply shorted everything else out. It killed all sorts of parts. Some of these things were covered under warranty, and other things weren't and needed to be replaced. With bills piled up, I was offline for months. Recently my graphics card went, and now my hard drive is going.

One thing alone isnt so bad. I am a person who merely tries to stay out of the way and keep my head above water. But lately... that water is getting a little too thick to tread, and I think there are some rather spiny scary things circling around me in the dark.

I am not a person who asks for help, nor do I accept it very well. But now... I'm asking... and trying very hard not to delete all of this and just fizzle out into the aether. 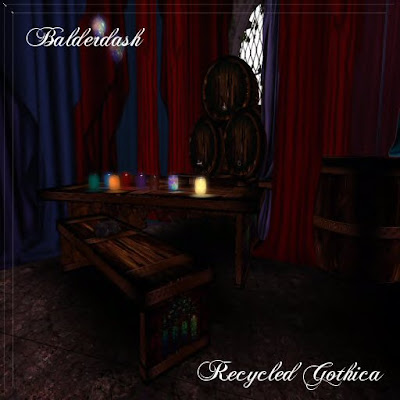 Recycled Gothica ... Trestle Table, Trestle Bench, and the Recycled Gothica Pew
These were fun ;) These are constructed using bits from an old church... The table top is an old door, the wood is recycled flooring, and the supports are Stained glass windows and gothic trim carvings. Is it wise to throw those windows on the floor under a table? Maybe not, but hey, its SL.. and I like em.

The bench and pew dont have poseballs, but the bench has four poses, and the pew has three :)

Casks o' Goodness! Big old barrels, one is tapped, and the other is :)

And another one I've been working on for quite a while but never got them to a place (visually) that I liked enough to release them... until now ;)

Candles in Jelly Jars! :) Several different colors, these throw a gentle flickering light on the surface below. I -love- these, and I hope you will to!


All that said... Thank you all for your interest, support, and well wishes. :)
Posted by Saiyge Lotus at 12:47 PM

My dear you are talented... your work is original... I hope you stay in SL and I hope to meet you someday.

Thank you so much Burke -smiles-
I'm a bit of a recluse but approachable (at least I hope so!) Give me a yell anytime :)