From the release notes:

The little story below is a little longer than intended, but  to see the nitty gritty details,  <3 Scroll past the silly story for details on the plants I am releasing! :)

Once upon a time there were, what I would call - a troupe of drunken and mischievous fairies. Now, these fairies were so accustomed to being in a state of drunkenness - being loyal followers of Bacchus you see, that I don't think they knew what sobriety even felt like any longer.
Really- I think its best to think of this bunch as the Fae equivalent to the Bad Girls club, or like ... the Jersey Shore of Oubliette.

Well, they weren't always in a stupor you see. They spent an awful lot of time lounging around, tending to the plants in the forest, being pretty, being a little lazy, being petulant. - They weren't so terrible at first. They would imbibe on mead and drops of Moonsycle dew, they would get tipsy occasionally, but they weren't really out of control until say - Chrystos and his fantabulous tavern.

Chrystos was mortal, and he was fancy. When I say he was fancy, I mean... in a rugged manly lumberjacky way. The fairies had no idea what hit them. If his good rugged looks weren't enough, if his bright white smile were not devastating on its own, if his clear green eyes were not  so entrancing... well, there was his wine.  And Chrystos' wine? - was more fancy than Chrystos.

"What does all of this have to do with plants, Saiyge?" you ask? Oh. I am getting there. I promise.

One moment spent in earshot of Chrystos' booming, infectious laughter mixed with one drop of his special house wine? Those fairies were entranced, and in love. I don't know about you - but I can't think of a more drama filled situation than a bunch of drunk wine-bathed fairies in love with the same man.  Oh... Poor Chrystos.  So now we have really drunk, really alcoholic, really belligerent and jealous fairies - and one poor (but burly) wine maker. What we have my friends- is some hi-jinx.

We know in theory, if not by experience, what happens to lovelorn, angry, alcoholic types. Things that were once important sort of.... start to pale on the priority list.  Our fairies are no different, and what happened is a mini-war, but a far more dangerous and perhaps amusing one, because these were angry, drunken fairies who have lost complete control of their aim. Curses meant to cause a nose to grow three times its size were overpowered and missed their target, causing trees to skyrocket to impossible heights. A jinx originally meant to create itchy shrinking undergarments landed on an innocent bystander who then could not seem to keep their clothes on no matter how hard they tried - nor could their children, or their children's children! (Thats another story, but you can see their descendants to this day, running around the grid in the most unexpected of places!) And the real point of this story - would be the fairy who tried to make herself taller and more human seeming in the hopes of enchanting Chrystos.

Sometimes when we are under the influence, we tend to see things a little differently and make poor judgements. In this case - our fairy went to a less.... benevolent creature and received a potion. I am not exactly sure what the conditions and instructions were for the potion - But I do know that when she went to drink it,  her ankle was ensnared by a creeping plant which caused her to trip over a tree root. The potion flew out of her hands and landed on a turtle... Now this turtle, (from what the trees can remember) just went on its slow, but merry way, spreading drips and drops hither and yon - and the fairy, unable to find the potion bottle, was ENRAGED. She cursed a blue streak so foul and long that it is said she broke her voice and could never utter anything but a forlorn croak afterward.

Before she was through though? She slurred. She slurred an awful lot. Over time, anywhere the turtle wandered, strange things started to happen. Plants grew and spread, things that shouldn't be possible started coming into being. No one really knows what new things we will continue to find, but I can tell you that the reason Ode is always spring, is because that turtle wearied of the long winters, and chose to retire to the meadows of Ode with his family. -On oubliette though, you can see the evidence of what that seasonal imbalance has caused, in our towering trees and our out of control plant life.

Which brings me to ....... The Fairy Creepers!  You can *try* to take care of just one of these creepers, but left unchecked - you might find it spreads rather prolifically.  Is it invasive on other islands? I have no idea. But should you choose to take a set of these home, I would urge careful tending of these creepers.


15 Different creeping plants for hanging, climbing, creeping, twining...
Each different piece is one prim and are designed to use together or alone. 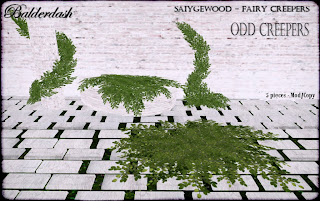 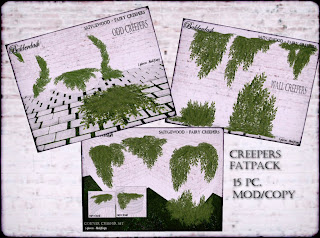 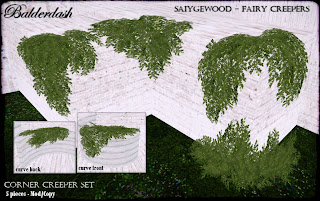 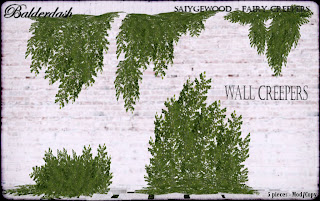 Broken up into three packs of five pieces each: Corners, Wall Creepers and Odd creepers. Also available in one big bundle!

Available on the Marketplace: Here

Or see them in person at the store!  (recommended)