I've been procrastinating on this post for a while now, but figured I'd better toss it out there before a year goes by :)

First, please remember you have two options for release updates. There is a normal, traditional group listed under Balderdash, and then theres the subscribe-o-matic group, which is right outside the door at the shop. Same updates and all that, but I'm not limiting chatter in the normal group. My regular group is pretty quiet, but every once in a while people talk in there and because I like to get to know people, I dont want to be a crazed moderator. SO! If you dont like a little chatter, just use the S.O.M. option ;)

Jewelery first, and then all the other stuff :) 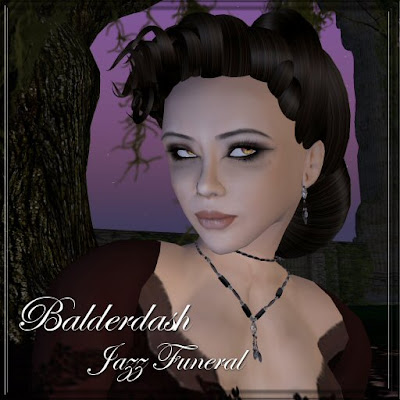 Jazz Funeral Necklace & Earrings set
My first beaded set! :) It occurred to me, not for the first time, while building this and the next release, that for someone who loves, loves, loves making jewelry, that I certainly despise and hate the tedious placing of actual necklace chains.

I know there are rezzers for creating oh so perfect necklace bits (at least for around the throat), I just cant seem to bring myself to use them. Then I sit and think of how much faster it is for me to bead in RL.... which is part of why I try to make my jewelry imperfect I think. Real chains and beads kink, they dont lay absolutely perfectly, yah? 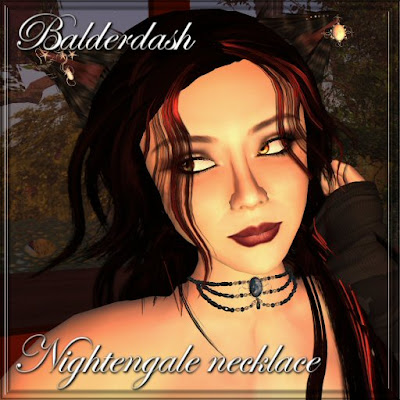 This choker piece is a partnership betwixt the previously released Meadowlark and Jazz Funeral. The darker side, if you will, of that cameo I did to go along with Hya's purty dresses. I had done this blue cameo shortly after that release, but really had no idea what to do with it until recently. Here it is, nestled in with a mix of hematite, jet and crystal. 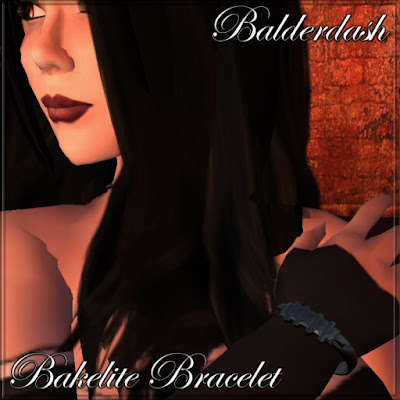 Balderdash now sports a lucky chair. It was a complete impulse idea, which caused me to make this little bauble.

Simple black bakelite bracelet. I forget to make bracelets and rings an awful lot, because I get so aggrivated with the wrist into forearm mesh, or the way my AO messes with my hands, so, because I don't often wear rings etc, I just plain old forget to make them. Bad Saiyge, no biscuit.


And then there was mooooore stuff, including a few secret releases you diddnt get spammed with in the groups. (I know, I know, bad bad bad me.) 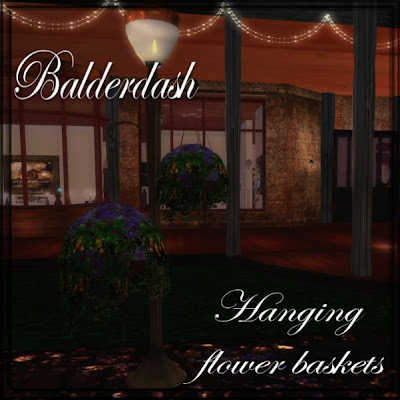 Whats a French Quarter inspired build without some flora hanging around and about eh? This basket is available in three sizes, Small, Medium, and OH MY GOD ITS HUGE.

The large ones are for those of you who, like me, have a gigantic balcony and don't want the baskets to get lost in all the space. 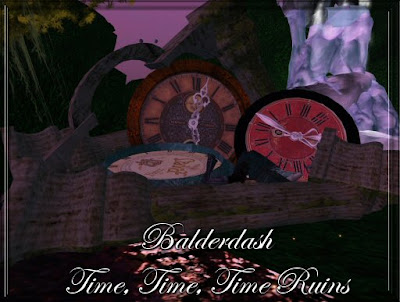 
A while ago, around the time I made the Persistence set, I had made this beat up sculpture. I think it was back when I was in Caledon still, and I couldnt find the prims to toss it all out there, AND I figured... who would want this thing? Apparantly, a few friends wanted it, so here it is, with a few poses thrown in for good measure.


I'm going to have to either forgo pictures here, or split this into another post.... So for now, here's a quick list of other things you may have missed.

The Cajun fog Gaslamps.... All of which fall under 6 prim.
Streetlamps - Found outside the shop
Wall mounted - Found outside on either side of the doors...
Ceiling pendant - Reflects stars on the ceiling! You can find it inside and just look UP :)

The Old Swamp Willow - I -love- this thing :) I'm a tree hugger, I know. I grew up being a tom boy and climbing trees, hiding in them for hours. This old man is really just a trunk that bends over the water at the shop. There are five poses in it for lazing away the afternoon with your friends ;)

Fountains! There are two fountains outside the shop in the courtyard. I was so excited on how they turned out. You can see peeeektures on my flickr stream, or, alternatively, you could come see them at the shop :) I am still in love with these so I figure its a good sign yah? :)

My first plants were a bunch of herbs that never saw light of day at the store. I've gone and released one, "Saiyge's Rosemary" You can find it by the Old Willow near the water :)

Sculpted votive holders.... I love my jelly jar candles, but wanted to offer a lower prim version. These turned out more frosted in appearance, mostly because they just cant refract light the same way as the multi-primmed out jars. These are tucked in around the store in various colors.

More in the works! Including that spanish moss some of you keep poking me for :)
Posted by Saiyge Lotus at 8:58 AM